It’s true what they say: what goes up, must come down.

In this case, at least, “down” just means a slight plateau. (Don’t worry–this isn’t 2007.) According to the Dow Jones S&P/Case-Shiller National Home Price Index released yesterday and an analysis from Ralph McLaughlin, Trulia’s chief economist, May 2016 marks 49 months in a row of positive home price gains. Thanks to double-digit appreciation from 2012-2014, homeowners have been successfully recouping equity during the recovery. 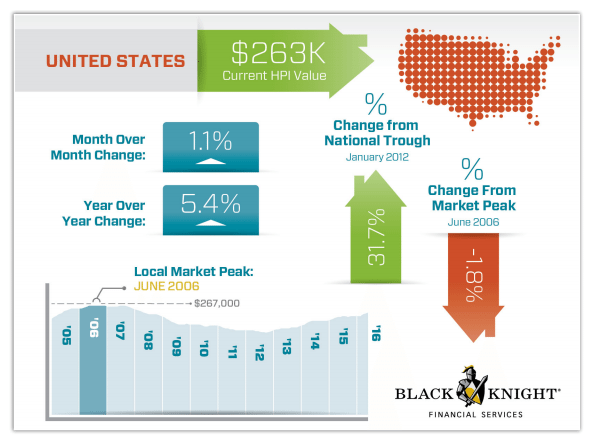 But over the past four months, year-over-year price gains have either plateaued or declined–a clear sign of market cooling and, therefore, stabilization.

“Home prices continue to appreciate across the country,” says David M. Blitzer, Managing Director and Chairman of the Index Committee at S&P Dow Jones Indices, in a press release. “Overall, housing is doing quite well. In addition to strong prices, sales of existing homes reached the highest monthly level since 2007 as construction of new homes showed continuing gains.

San Francisco experienced its slowest annual gains in May at 6.5 percent since August 2012.

According to the Trulia analysis, “the continued slowdown suggests the San Francisco housing market may finally be entering a phase of normalcy after years of sustained price appreciation, although persistent increases have left homebuyers struggling to find affordable homes.”

Things may be slowing down on the West Coast, but our neighbors to the east are experiencing a different turn of events.

Per McLaughlin: “Though Western markets continue to dominate price growth, several markets east of the Mississippi are picking up.”

“Regional patterns seen in home prices are shifting. Over the last year, the Pacific Northwest has been quite strong while prices in the previously strong spots of San Diego, San Francisco and Los Angeles saw more modest increases.

“The two hottest areas during the housing boom were Florida and the Southwest. Miami and Tampa have recovered in the last few months while Las Vegas and Phoenix remain weak. When home prices began to recover, New York and Washington saw steady price growth; now both are among the weakest areas in the country.”