Moving back in with the parents–super embarrassing, right?

Maybe. But, according to a recent Pew Research Center study, that isn’t deterring millennials from moving back home more than ever before.

Using data from the U.S. Census Bureau from 2014, Pew concluded that a record 60.6 million Americans–a whopping 19% of all U.S. households–are living in multigenerational housing, but even that number is underestimating the real amount.

Conversely, the Census Bureau requires three generations to consider a household multigenerational, though one of those generations can include minor children.

This is a big change from 1980, when the population share dipped to 12 percent. “Since then, multigenerational living has rebounded, increasing sharply during and immediately after the Great Recession of 2007-2009,” stated Pew.

In 2009, the population share of households with more than one generation of adults increased to 17 percent. The number rose to 18 percent in 2012. Now, it stands at 19 percent.

Though the trend can be observed across “nearly all” racial groups, said Pew, it is significantly more pronounced in black, Asian, and Hispanic households. 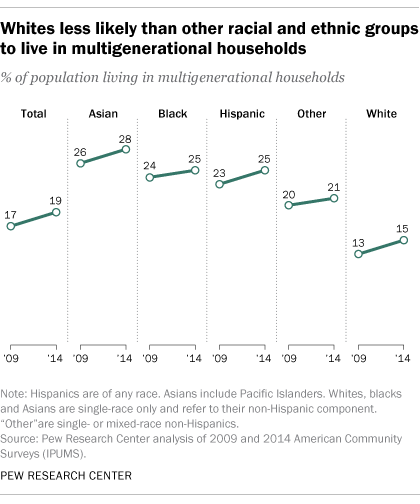 Additionally, women are more likely than men to live in a multigenerational household (20 percent for women and 18 percent for men).

According to Pew, “The most common type of multigenerational household–home to 29.7 million Americans in 2014–consists of two adult generations, such as parents and their adult children.”

Head over to Pew to check out the complete study.