It’s been a long time since the L.A. rental market slowed down its heretofore exponential growth. Fortunately for renters, September experienced its first monthly dip since November 2015. The average rental price now rests at $1,219–yep, one whole dollar less than August’s average.

In 26 out of the 30 local markets measured by Yardi, rent prices grew year-over-year by at least 3 percent in September. Sacramento experienced the most growth (11.1 percent), while San Francisco had the least, thanks to an increase in inventory.

There’s a high demand for affordable housing units, and the renter by necessity sector is seeing its growth outpace the lifestyle sector, according to Yardi. The trailing 12-month growth rate in September was 5.9 percent for all asset classes — 5.4 percent for lifestyle and 6.2 percent for renter-by-necessity. Fortunately, Yardi expects new apartment completions to reach 360,000 in 2016 throughout the nation, which should offer some relief to the renter by necessity sector.

While rents are continuing to keep pace with previous predictions, the report shows job growth is slowing nationwide. The same metros that are seeing a bump in supply have seen a slow in rent growth, like San Francisco and Denver.

Job growth in Los Angeles is reported at a year-over-year rate of 2.4 percent, according to Yardi, and as of September 2016, completions in the area comprised 1.2 percent of the total stock of housing. While the completion rate is considerably low, the occupancy rate dipped  infinitesimally month-over-month from August, from 96.9 percent to 96.8 percent.

By the year’s end, Yardi expects rent growth in L.A. to hit 7.1 percent. 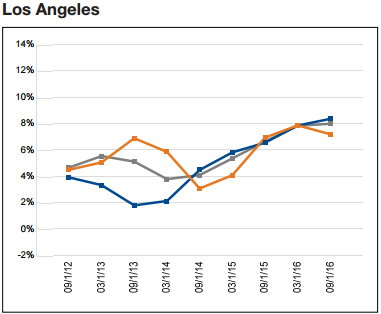 Click here for the rest of the Yardi Matrix monthly report.
Source: Inman

Snapchat vs. Facebook Live: Which is Best for Real Estate?

The McMansion’s Day Has Come and Gone