The second climate map of Q3-2017 has now arrived, and we’re looking at the sales volume of Condos & Co-Ops. An overarching trend can be seen in this season’s market climate maps: the southern and northwestern regions of Los Angeles are dominating the market. With lower-priced homes in a high-ticket environment, it seems that buyers are taking advantage and snatching these properties while they can. Sales activity is also being boosted though various commercial and urban development projects underway, including new Metro lines, shopping malls, and a push by the city to develop more transit-oriented, affordable housing.

Another exciting revelation? Total sales volume and quantity are up. Here’s a final tally of the results from this quarter compared to last year:

With smaller inventory at play for this category, the difference between one or two sales in a given area is enough to make the numbers jump up and down drastically, and this season was no different. Here are the highest areas of growth this time around:

South Los Angeles came out swinging this past quarter, and at the top of the ranks was Metropolitan South. This area only grew from one home sold in Q3-2016 to 5 homes sold in Q3-2017.

Neighbor to the highest area of growth, Metropolitan Southwest landed at the number 2 spot, growing from 2 homes sold in Q3-2016 to 5 homes sold in Q2-2017. This is likely an effect of Measure JJJ that was passed last November, which encourages the development of affordable housing units in the area.

Atwater Village is in the midst of an ongoing urban planning issue. A proposed equestrian/bicycle/pedestrian bridge that would span the LA River and connect the area to Glendale was originally estimated to cost $5 million. The project was delayed and lost its major donor, the estimate grew to $16 million, and now, the the latest estimate has grown to $20 million. However, this situation has done nothing to deter the sales of condos & co-ops in the area, as it grew from 1 home sold in Q3-2016 to 5 homes sold in Q3-2017.

The progress on the Crenshaw/LAX line may have something to do with the increased purchase activity in North Inglewood, which grew from 25 homes in Q3-2016 to 36 homes sold in Q3-2017. With relatively high sales volume for its area, North Inglewood continues to test how many sales the local market can handle.

Playa Vista produced impressive numbers this past quarter, growing from 28 homes sold in Q3-2016 to 39 homes sold in Q3-2017. In case you missed last week’s article, it’s easy to figure out why sales are booming in the area: it’s now the heart of Silicon Beach, home to tech giants like Facebook, Youtube, and Google. 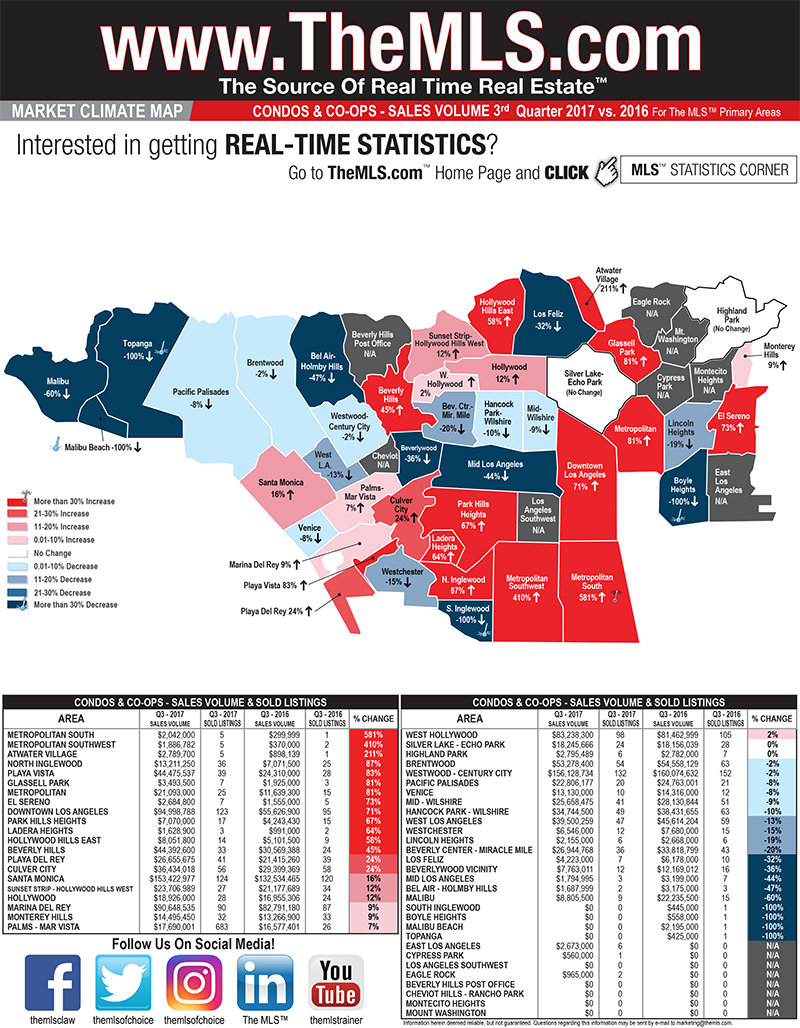 Introducing The New Logo for The MLS™