Our second market climate map of Q4-2017 is here, and today we’re looking at the sales volume generated by condominiums & co-operatives in The MLS™ Primary Areas. With numerous multi-family developments recently completed and many more on the way, 2018 is shaping up to be an exciting year for multi-family real estate.

Although Los Angeles Southwest saw the highest growth at 620%, it only sold four homes – a figure that does not hold much statistical significance. Thus, we are ranking the top five areas by greatest quantity sold with a sales volume growth rate of at least 20%. Here are the hottest areas from this past quarter:

With the completion of the Wilshire Grand Center and a dozen more housing developments last year, the condo market in DTLA is smoking hot. This area grew from $51.3 million in sales volume in Q4-2016 to $65.1 million in Q4-2017. You’ll be excited to know that the action doesn’t stop here, as there are still several major projects in the works for 2018.

Mid-Wilshire more that doubled its sales volume in this category, growing from $23 million in sales in Q4-2016 to $48.5 million in Q4-2017. If all goes according to plan for developer “1180 La Brea, LLC”, then a 67-unit housing development should begin construction at La Brea and Edgewood in the near future.

Brentwood grew from $40.8 million in sales volume in Q4-2016 to $50.9 million in Q4-2017. Normally favored for its array of luxurious single-family homes, Brentwood saw a decline in single-family home sales volume this past quarter, as seen in our previous market climate map. As multi-family residential business grows in this area, it may begin to lose its reputation for its low population density.

The Hancock Park – Wilshire area put up some impressive numbers, growing from $20.4 million in sales volume in Q4-2016 to $31.6 million in Q4-2017. Buyers in this friendly, beautiful neighborhood will find themselves in good company, as it has attracted the likes of Drew Scott, Margot Robbie, and Mindy Kaling.

The ever-popular destination for bachelors and actors, it’s no surprise that Hollywood made the top 5. Although this area only sold a few more homes in Q4-2017, it still managed to outsell Q4-2016 by $7.8 million in sales volume. 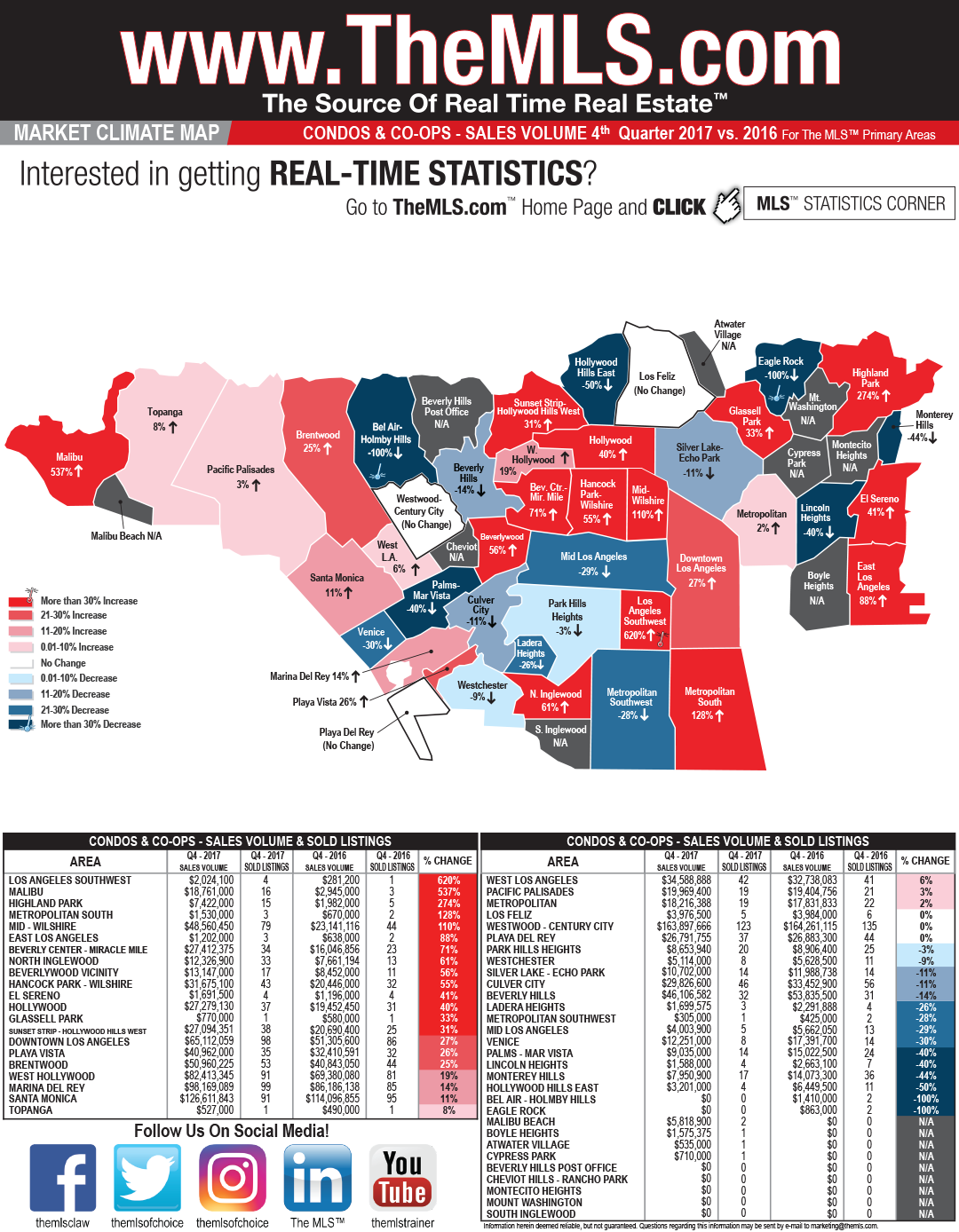 Tickets Now On Sale for The MLS Summit™ 2018