Our third market climate map of Q4-2017 is here, and we’re looking at the median sale price of single-family homes within The MLS™ Primary Areas. This predominantly red map illustrates the joy of being a seller in Los Angeles in the current housing market. The Q4-2017 landscape saw 39 areas of growth (5 of which was significant), three areas with no change, and only 8 areas of decline. The only area that saw “significant” decline was Metropolitan, which fell from only one home sold in Q4-2016 to zero homes sold in Q4-2017.

Many of the areas earning the highest numbers this time around are the usual suspects, such as Bel-Air, Santa Monica, and West LA. However, it’s worth noting that several areas with the highest growth actually sold fewer homes than they did the previous year – Beverly Hills and Westwood / Century City stand out in this regard.

Taking this into consideration, here are the top 5 hottest areas with the highest growth in median sale price that also saw an increase in quantity sold:

Bel-Air grew from a median sale price of $1.4M in Q4-2016 to $2.4M in Q4-2017. As impressive as this is, the number may have been even higher, had we not experienced the Skirball Fire in December. Following this disaster, which burned 475 acres and destroyed six homes, listings have been pulled left and right, and real estate professionals share a growing concern that property values will drop in the coming months.

Santa Monica grew from a median sale price of $2.3M in Q4-2016 to $3.4M in Q4-2017, making it the greatest dollar increase in this list. Don’t start planning your next McMansion development just yet though, because the city just approved a new bill that will temporarily limit the size of new single-family residences. Despite what some may see as a setback, the Santa Monica market remains red-hot, and as of now, the city holds a healthy inventory with 37 active listings on The MLS™.

Beverly Hills Post Office definitely earned its place on this list, growing from a median sale price of $2.6M in Q4-2016 to $3.4M in Q4-2017. If you have a high-profile buyer looking to settle in the area, they’ll be happy to know that the LA City Council has passed new restrictions on those obnoxious Hollywood tour buses, including a ban on loudspeakers.

The Silver Lake / Echo Park area touted a seven-figure median sale price this past quarter, growing from a median sale price of $847K in Q4-2016 to $1.03M in Q4-2017. If your buyer is single, they might be interested to know that Silver Lake touts one of the highest percentages of “never married” residents in Los Angeles county.

Metropolitan Southwest grew from a median sale price of $365K in Q4-2016 to $435K in Q4-2017. This area saw outstanding growth in all categories throughout the course of 2017, with either a top rank or an honorable mention in five previous market climate map articles for the year. With plenty of urban developments projects on the horizon, we don’t expect this trend to falter any time soon. 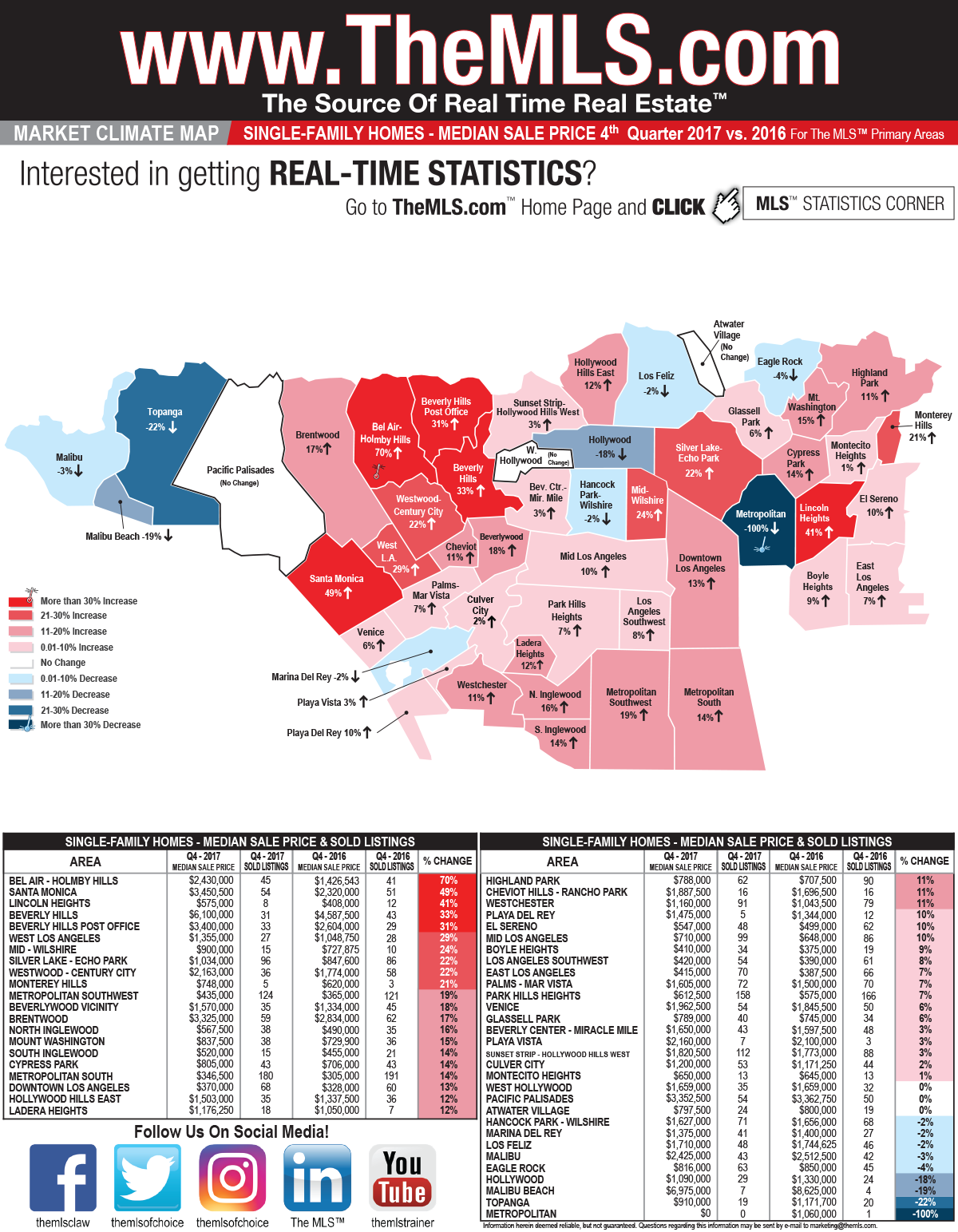 Introducing Our Expert Panelists for The Summit