Our first market climate map of Q3-2017 is here, and it brings good news for the real estate industry: a lot of people still want to buy homes in Los Angeles, and they’re willing to pay top-dollar for them.

Admittedly, the data shows that sales volume has slowed down a bit. However, this is relatively speaking; as we explained in a previous post, Summer 2017 saw the highest sale prices and lowest days on market in the past decade. Although Q3-2017 didn’t outshine the record-breaking numbers seen in Q2-2017, it was still a rather successful quarter for a majority of sellers and real estate professionals throughout The MLS™ Primary Areas. Here are a couple of snapshots comparing this quarters’ growth/decline in sales volume to Q2-2017 and Q3-2016:

Here are the highest areas of growth this time around:

Playa Vista grew from 3 homes sold in Q3-2016 to 10 homes sold in Q3-2017. While homes aren’t moving in large quantity in the area, Play Vista nonetheless demands respect, as it is now the Southern California home of Facebook and YouTube. With millennials steadily growing their income in technology-centric careers, don’t expect this area to cool down any time soon.

West Los Angeles put up some impressive numbers, growing from 25 homes sold in Q2-2017 to 41 homes sold in Q3-2017. This area has no shortage of action and excitement. Earlier this month, Time, Inc. announced that it would be relocating its Entertainment Weekly headquarters to its offices in the area.

Ladera Heights has seen consistently significant growth in 2017, and this was its best quarter yet. The growing interest in Southern region of Los Angeles continues, likely due to the high interest in commercial development. In addition to becoming the home of two NFL teams, the area is currently on standby for an expansion of Metro’s Green Line and is on the cusp of being greenlit for several other projects, such as The Broadway Square (formerly known as The Reef / SoLA Village), and the redevelopment of the Baldwin Hills-Crenshaw Plaza. 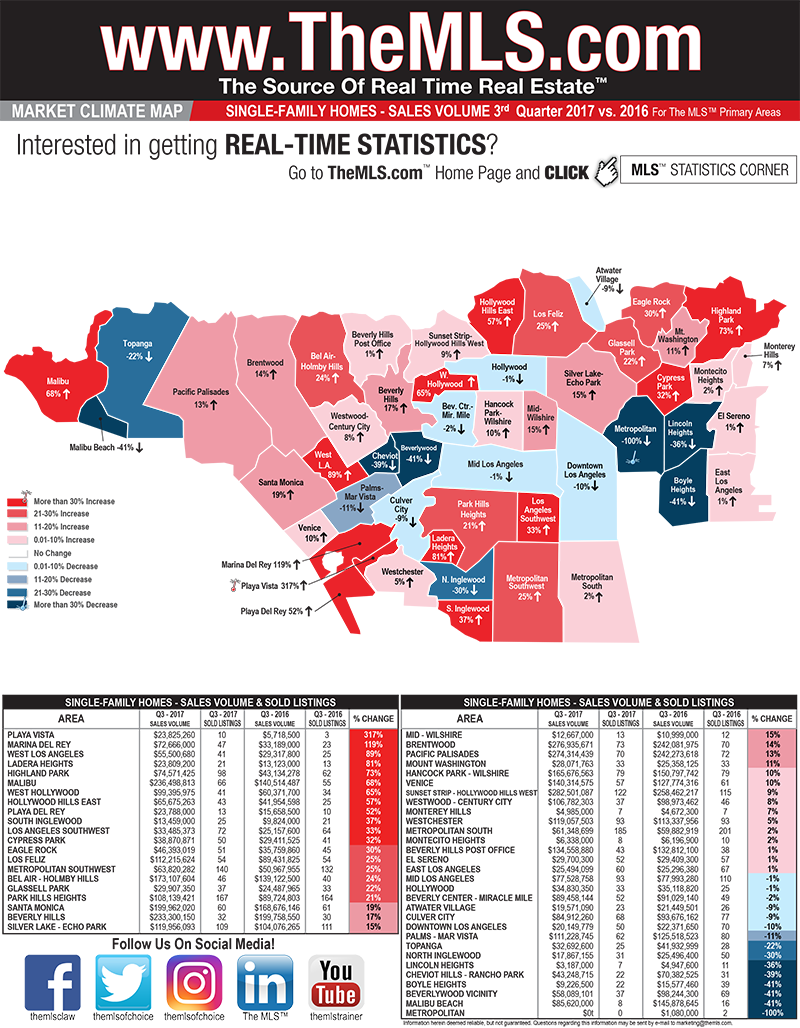